It was a day of reckoning for 22 awardees in three categories – 8 individual rural women entrepreneurs, 7 Self Help Groups and 7 NGOs, who have been working tirelessly towards socio-economic empowerment of rural & tribal women. Vedanta Group Company Hindustan Zinc had launched women empowerment campaign ‘SAKHI’ with a focus to provide training and skills by organizing rural and tribal women and organized them into self-help-groups broadly known as Hindustan Zinc ‘SAKHI’ self-help-groups. As part of campaign “Sakhi”, Hindustan Zinc also constituted “Hindustan Zinc ‘SAKHI’ Awards” to motivate and give recognition to such individual women, self-help groups and NGOs.

The award function was organized in Jaipur recently with a gathering of about 200 people including 125 rural and tribal ‘Sakhi’ women who had travelled from across Rajasthan. The Chief Minister of Rajasthan, Smt. Vasundhara Raje graced the occasion as a Chief Guest. Mr. Anil Agarwal – Chairman, Vedanta Group as Guest of Honour. 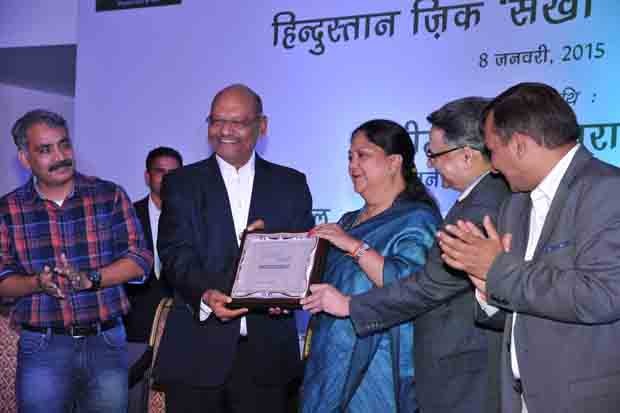 Hon’ble Chief Minister, Smt. Vasundhara Raje spoke about the need for rural women empowerment and urged the industries to come forward and assist in developing online sales platform for the products of these rural & tribal women. She also asked women awardees to take up cleanliness as important part of their day to day activity and should motivate other people to follow the same. She mentioned that SHGs are ‘change agent’ and should be encouraged.

Chairman, Vedanta Group – Mr. Anil Agarwal spoke about “Sakhi” campaign and commitment towards bringing more women in the “Sakhi” network to improve their social and economic condition. He also said, “Hon’ble Chief Minister is the biggest “Sakhi” and her inspiration and advice would keep this momentum alive”.

CEO-HZL Akhilesh Joshi, assured further training to these rural and tribal women and for linking their products to a wider market so that their profit margins increase.